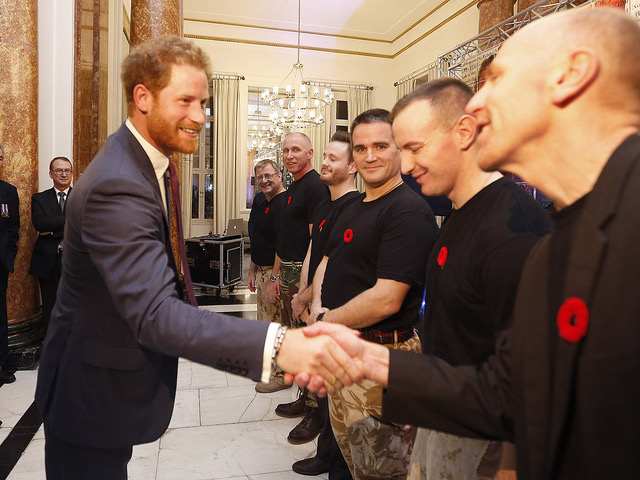 <![CDATA[<em>Meeting the troupe: Prince Harry meets with those involved in creation of Contact!Unload, which will be performed at the Invictus Games. It is an immensely personal, raw theatre piece telling the story of veterans by veterans.     In Conversation with … Professor George Belliveau Professor of Theatre/Drama Education at the University of British Columbia, Canada   It may seem cruel, almost inhumane to get ex-soldiers to relive on stage for audiences the physical and mental battles which have caused them years of suffering. In fact, the veterans say it’s a process of healing. And it has let them reach out with empathy and hope to other soldiers, veterans and civilians, including parliamentary decision-makers, and even Prince Harry. George Belliveau, Professor of Theatre/Drama Education at the University of British Columbia, Canada, was at the heart of this emotionally heart-wrenching but ultimately positive three-year project as researcher, director and actor. Fellow project leads were UBC professor in counselling psychology Dr Marvin Westwood and artist Foster Eastman. It involved health and psychology researchers, visual arts and theatre practitioners and Canadian military veterans of the Afghanistan conflict in a series of drama-based workshops that led to what has been described as the immensely personal, raw and powerful production of Contact!Unload, performed by many of the veterans themselves. “These veterans have journeyed from the battlefield to the counselling room to the theatre, where they perform their lived experiences,” George said. “The play depicts loss, survivor’s guilt, but also shows the camaraderie and brotherhood … It shows their pain, hurt and inner struggles, but also the patterns and pathways towards healing.” The process of months and years happens before our eyes on stage as these men, whom the public often see as indestructible, acknowledge they are partially broken and work as a group to start stitching the pieces back together to move forward. The play, originally planned for just three performances, has been presented more than 20 times in Canada and the UK, reaching over two thousand people (military and non-military), including a performance for Canadian parliament and a private performance for Prince Harry. It will now be featured as part of the Cultural Program for the Invictus Games in Toronto, Canada, in late September, where wounded veterans from over 17 countries participate in adapted competitions. A shorter one-act piece Unload will be performed as part of the 9th Annual International Arts and Health Conference at the Art Gallery of NSW. “Seeing the veterans in our group perform for Prince Harry was incredible,” George said. “I perform in the play, but it was seeing their synergy with the Prince, who also served in Afghanistan, that made the biggest impression. “His reaction to both the play and art was very emotional – he got what we were doing. “He understood trauma and sees the value of engaging in artistic ways to deal with mental health. “He encouraged us to keep doing what we’re doing.” But having seen the results for the veterans and the impact the play has had on others, little encouragement was needed. Twenty-two veterans suicide every day in the US and, as well as helping the veterans with whom they worked, at least 15 military men who have seen the play have actively sought help for mental health. Anecdotally, a similar number of civilians have reached out for help. “The project is about raising awareness that there is help for veterans to deal with their traumas,” George said.  “We hope that other countries recognise the group approach to dealing with veterans experiencing operational stress injuries. “We also hope that our approach of using the arts to look at trauma can be useful to others.” This has been a unique collaboration, specifically in the fact that the majority of “actors” are the veterans themselves, who have co-created the piece.  “The process of creating the artistic work helps continue their healing. We learned way more from the veterans than they likely learnt from us as civilians,” George said. “Their humanity and courage to confront their trauma is hard to explain in words, and then to publicly perform their stories to others is quite phenomenal.” The traditional concepts of what makes a man – being tough, strong and reserved in emotions, wearing a uniform – had to be overcome, George said, with men needing the courage to release their emotions. One of the central messages of the play is “you’re never alone”. Whether on the battlefield or at home, other vets “have your back”. That made the difference for Corporal Tim Garthside, whose story is one of those played out. Tim faced the unimaginable decision as to whether to send planes in to shoot a man on a roof carrying a rocket launcher. He gave the order. That man turned out to be a Canadian informant, leaving Tim to feel he had killed his men’s only hope. “I spent so long suffering alone and in darkness. I was frozen on that day for 7.5 years,” Tim said. “I moved through life like a robot. It took four months before I could stand in a grocery store line-up without feeling seething rage.” After the show for Canadian parliament, Tim said “it allowed me to show the decision-makers of this country exactly what my experience was like in a way that’s so visceral – I force them to feel it”. As for his feelings regarding the process, he said: “The gift this production has given me is I can let the emotion out – I can finally let it go.”

To learn more about Contact!Unload go to http://pwias.ubc.ca/videos/contact-unload-parliament-hill.
Share this