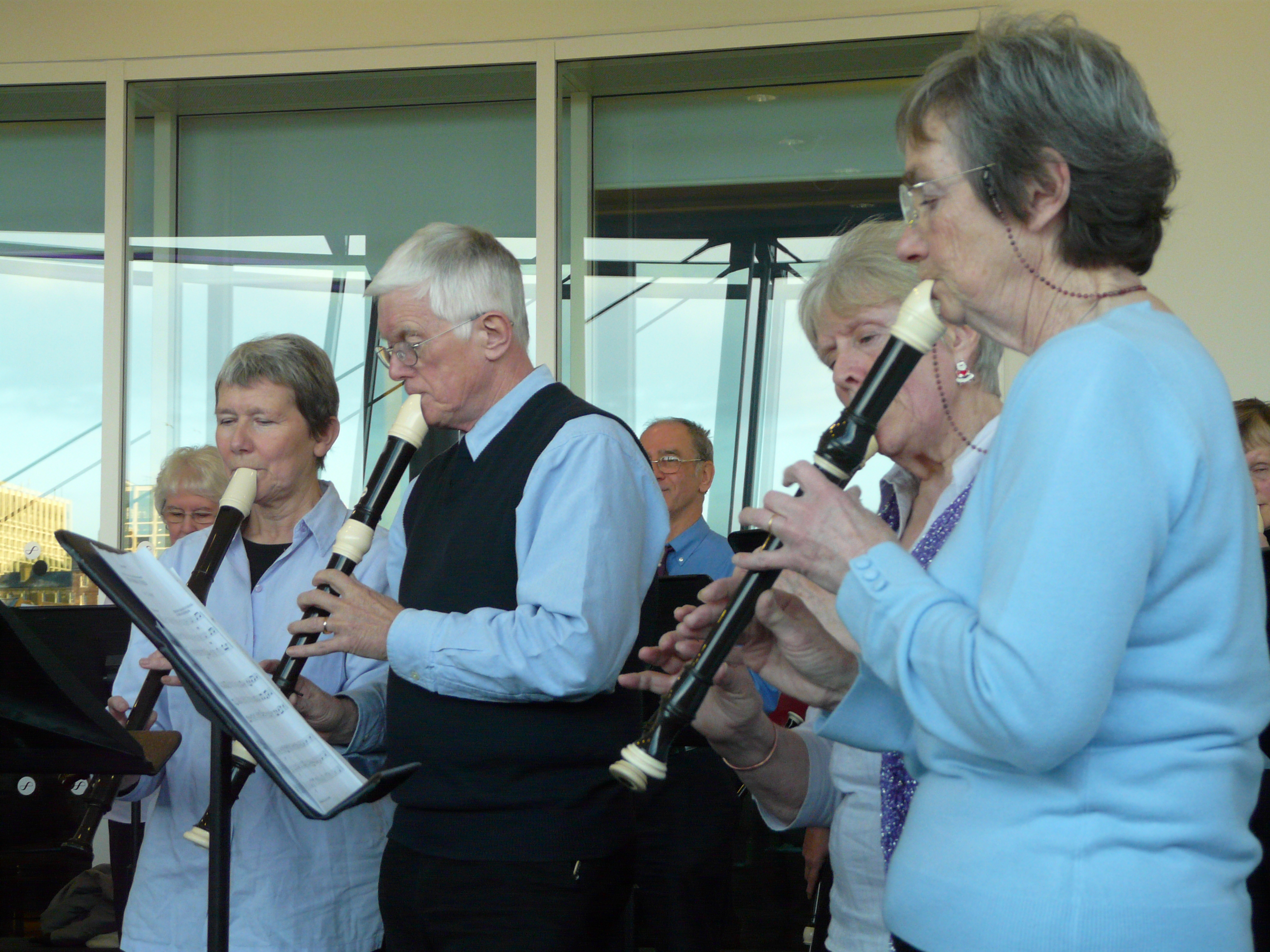 In Conversation with … Professor Andrea Creech
Professor in Music Education at the Université Laval, Canada
Image: Recorder group at Sage Gateshead Silver Programme
We all have a basic and lifelong need as humans to be creative and make a contribution.
And that’s where music and music-making can play a crucial role, according to Professor in Music Education Andrea Creech, of the Université Laval, Canada.
While society recognises and, to a large extent, meets the human need to be cared for and to belong, Andrea said we often forget the importance of ‘social affirmation’ – making a contribution, feeling valued and being creative.
“The arts provide a beautiful context for expression, for sharing, for cultivating that sense of meaningfulness,” she said.
This needed particular recognition, she said, for those in what is now referred to as ‘the Fourth Age’, when physical ailments often lead to dependency in residential care.
“My stepfather once explained to me that ‘the music stopped’ when he entered residential care,” Andrea said.
“Whereas music had been ubiquitous in his life, suddenly it was not there – replaced by the sounds of institutional routine.”
She said music-making – in his case singing – with his caregiver, a community musician and anyone who visited him in his long-term care facility, made life bearable in the face of multiple challenges. Image: Silver sounds
She believes music builds resilience.
“Participating in music is cognitively engaging and is associated with lasting effects on brain plasticity as well as with non-musical brain functions such as language and attention,” Andrea said.
“Listening to music has been found to provide distraction from physical and emotional pain.
“Perhaps the most important point is that making music is both social and communicative and is strongly related to sustaining a sense of who we are.”
After enjoying an international orchestral career as a viola player, something Andrea describes as still “really a constant in my identity”, Andrea moved into the teaching and psychology behind music. Image: East London IntergeneraNonal Music Project
Her research has focused on collaborative learning and the social, emotional, and cognitive benefits of music for older people in the community through creative ageing in and through music.
“There is a wealth of research evidence and anecdotal evidence to suggest that lifelong learning is one of the key underpinning characteristics of positive ageing,” Andrea said.
This relates to one of her favourite theories of motivation –‘possible selves’.
“Really positive ageing, I believe, is almost always accompanied by an enduring sense of having a ‘possible self’, of always having the possibility of ‘becoming’,” she said.
“I must add that although I am clearly an advocate for music, this is not to say that other kinds of activities – like baking, knitting, painting, drama, gardening, writing poetry, reading books together – cannot also be personally meaningful and hugely valuable.
“I think musical activities are so holistic (or, can be…) and that is what makes music special, but all of those kinds of activities that support our possible selves, our sense of being, belonging, becoming, are potentially valuable.”
While she said there is a growing body of research that suggests that old age can be a period of creativity, and she argues that “it is entirely possible, given the opportunity and support, to be creative at any age”, Andrea questioned whether enough opportunities were provided for older people to be creative. Image: Elder Voices, East London
Part of the difficulty here is changing people’s attitudes to ageing, including in themselves, and reconsidering what is possible in later life.
“There is certainly a lot of work to be done here,” Andrea said.
“I think two key points are:
1) providing opportunities and support for discovering that in fact it is possible to have a ‘possible self’ and to be creative at any age, and
2) facilitating contexts where multigenerational activities can take place, where stereotypical views of ageing can be shifted.”
And she believes this intergenerational approach is important, with older and younger generations having much to learn from each other.
“I think music certainly does cross generations,” she said.
“We need look no further than some classic songs – I facilitated an intergenerational workshop recently, where we performed ‘Imagine’, using iPad guitars and keyboards. It was a magical moment, really.”
“I must emphasise though that it is not always the young people with the energy and the new ideas!”
She said it was vital that the power of music and its importance as a resource for quality of later life be realised.
“We need to take this really seriously, investing in the infrastructure that will maximise the benefits of musical engagement for older people.
“Old age is not (or should not) be a barrier to creativity.”