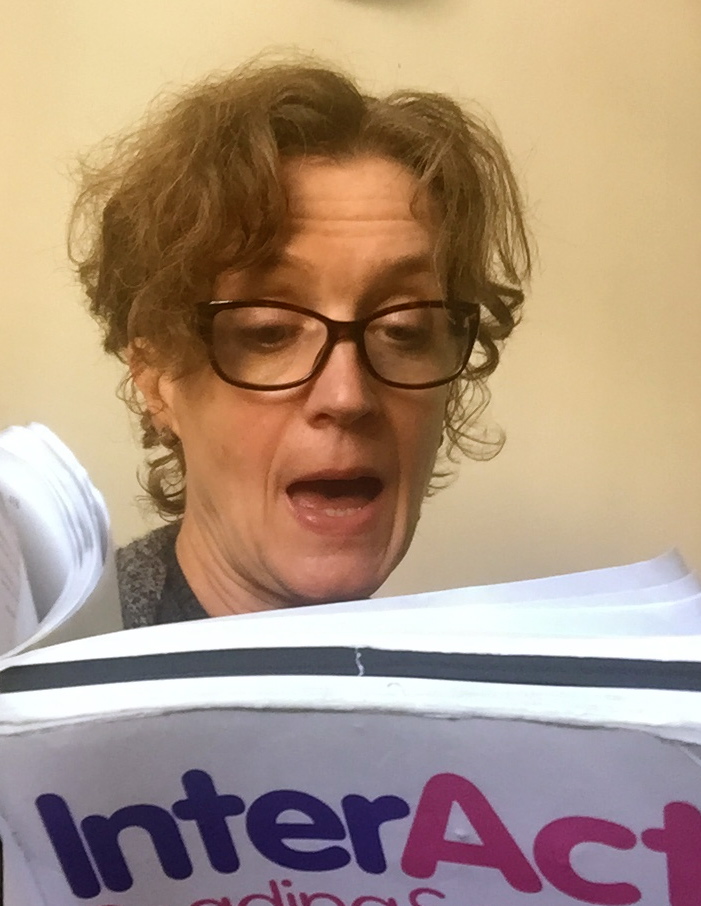 ROSE SAWKINS IS  one of very few actors who see their audience falling asleep as a compliment.

An actor-reader for over 12 years at London’s world-renowned National Hospital for Neurology and Neurosurgery, Rose uses reading as a vehicle to reach people who have had a stroke, as part of InterAct Stroke Support’s service. For her, a patient sighing, falling asleep, laughing or crying can all be signs that she has done her job of connecting to that person, helping them to release tension, to relax and heal.

Rose is usually with each person for no more than 20 minutes, in which time she has to make the call for those unable to communicate as to what may be “right” to read or sing to them. Clues can come in all forms, from photos, books, gifts and cards at their bedside, to an item of clothing, or a quick word with visitors or staff.

A reading can be poetry, passages of literature, an excerpt from popular fiction or even a piece from the newspaper. Whatever the choice, the result is essentially a one-person show “with the volume turned down” for a one-person audience.

A favourite piece for Rose to share is Ned Kelly, with the tale of the Aussie outlaw’s last stand taking London stroke patients out of the ward, away from the wires and machines, to a dusty outback street Down Under.

“It’s a story that appeals to certain people at certain times,” Rose explained. “I use it when I sense that someone needs a bit of lead in their pencil ….”

“He’s an arsey, angry, determined, pained and desperate character, and somepeople on stroke wards relate to that. They feel their bodies have betrayed them. Some say ‘why me; what have I done to deserve this?’

“It (the reading) is incredibly energising, because it’s about someone fighting to the bitter end, as some of these people feel they are going to need to do. The stakes are high …” Rose said it was “a very rare person on the ward”, whether patient, family, friends or medical staff, who wasn’t pleased to have the readers there. A year-long study at one of InterAct’s hospitals, St Thomas’s, found a significant change in the atmosphere in the ward after a reader attended, with a difference noticed in the motivation and energy levels of both patients and staff.

In some cases, she said, patients began practising speaking or physio exercises when they had been reluctant to try, or did something as simple as taking themselves off to wash or do their teeth, having previously not felt like bothering.

While passages last only up to 7-8 minutes, to match the listener’s concentration span, Rose said “reading the person” and communicating with them was just as important as “reading the words on the page”.

“Often the reading is a catalyst to get someone talking … it lets people be who they are beyond the stroke– it’s ‘humanising’,”she said. “A chat can relax the patient enough to accept a reading. They can be feeling that no-one remembers who they are.”

Staff, naturally, focus on the practical medical side of caring for the patient, while those close to them often have expectations, wanting the patient to ‘feel better’. “But the reader’s job is to let them be just who and how they are at that moment,” Rose said.

“Mostly the reader is a narrator, and playing characters in the story, but your main role is as a person – someone who is there for them; a human voice … The average patient is on their own for 23 hours a day, so many are desperate for human contact.”

And that’s why, Rose said, it took “a certain type of actor” to do this job – “it’s not about us at all”. Neither is the performance anything “too showy”, instead involving gentler energy, imagination, focussed vocal and physical technique.

Trained in performing, writing, media, and arts and health practices, Rose described herself as “essentially an introvert, as many actors are”, but “fascinated by people”. She said the actor’s energy, ability to read people, situations and notice things were vital to this role.

Notes are left following each session, regarding how the patient has responded. In some cases signs of depression may have lifted, they may have shown an interest in a particular subject, or revealed their hopes and fears while, in others, the person may be barely conscious, or unable to communicate.

The reader also needs to be able to “contain” any reactions to the situation – the emotions, smells, sights and sounds of the ward. “Plus, it’s pretty damn sad sometimes,” Rose said. “Your heart just breaks for them, but you have a job to do and have to hold it together.

“It (the session) aims to stimulate the brain and encourage people to have resilience when they’ve had a massive loss – because that’s what a stroke is. And providing any sense of hope and a reminder of who the essence of that person is, is a big part of our purpose.”

Hear more about Rose’s work and InterAct Stroke Support’s move out into the community at the 10thAnnual International Arts and Health Conference in Port Macquarie on the NSW Mid-North Coast from 12-15 November, 2018. To find out more go to www.artsandhealth.org.au  #artshealth18